Upon the advent of the launch of MyBBCGlobal.io, the company will make promotional videos available in multiple languages to spread the message globally that Bitcoin can be earned selling discounted crypto currency. For now, this Akana from Lagos, Nigeria, speaking English. More to come soon...

My BBCGlobal.io has introduced a 5K+ per month Bitcoin Matrix Builder Package for only $15.95 BTC! Plus, you will earn ZTA coins (Zenith) and earn 10% Matching Bonus. Join our Team Builds @ BlockchainListbuilder.com MyBBCBuilder.com where you can promote other crypto programs AND enter your MyBBCGlobal.io affiliate links in our downline builders. Plus, you can use our affilaite tools to build your team. Now is the time to get positioned!


This is the latest full presentation of MyBBCGlobal.io.

Please join one of team members @ either:

Both sites are team builds and have affiliate tools for you to use to build your team.

Reach out to your sponsor to get included in their rotator, and enter Your MyBBCGlobal affiliate link in our downline builders.

Looking forward to your success!

Here is a sample video of things to come @ MyBBCGlobal.io .

In the very near future, videos will be available in multiple languages as we spread our Team Build globally.

MyBBCGlobal.io launches 8/1/2022, but is steadily making improvements behind the scenes.

One of which is a 2x10 matrix where you can earn Bitcoin and ZTA at an entry point of only $15.95/month.

The earlier you secure a position, the better chance you will receive spillover as the company is brand new and has not officially launched.

If interested, please join our Team Build at either BlockchainListbuilder.com or MyBBCBuilder.com 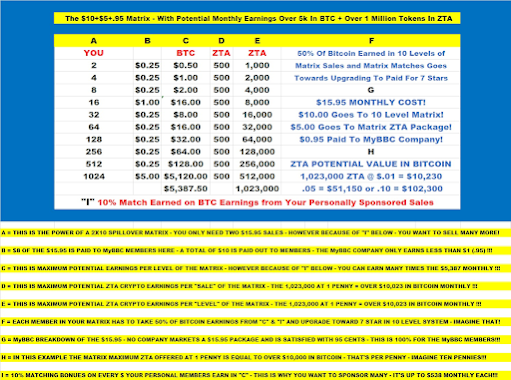 Today is my 31st day in MyBBCGlobal.io.  I made a video showing how my Powerline commissions are growing consistently with the discounted crypto coin ZTA Zenith.

Yes, you can purchase ZTA coin on the open market and you can check it out @ https://www.zenithzta.com/

However, this video explains why it is much more prudent to get the coin at MyBBCGlobal.io

There is a new proposal from Visa that will enable “interoperability between central bank digital currencies (CBDCs) and other stablecoins.” This comes after various countries around the world have been researching and testing CBDCs, while simultaneously the private sector has raced ahead with competing fiat-backed stablecoins.

The big question has always been whether the different stablecoin systems would be able to interface with each other. The independent market participants, regardless of whether they are nation states or private companies, have very little incentive to create the interoperability. This turned the conversation to large payment players like Visa, which stood to benefit by serving as an integrator of all types of stablecoins and CBDCs.

This is essentially what Visa is proposing with their new system. Any stablecoin or CBDC will be able to be used with any other stablecoin or CBDC as long as it interfaces through Visa’s system. I’m generally a big fan of what the Visa team is doing, and have been incredibly impressed by their open-mindedness when it comes to this new industry, but this new system feels like a re-creation of the legacy centralized system.

According to Coindesk, “the UPC protocol will allow payments through an entity known as the ‘UPC Hub’, acting as a trusted gateway to read the state of two ledgers, checking the eligibility of every payment.” According to Visa, “the UPC technology can play an important role between private stablecoins and public CBDCs by providing permissioned access for whitelisted stablecoins to be interoperable with CBDCs.”

This Visa proposal essentially creates a new type of third party clearing house for all transactions, while also re-creating a new permission mechanism. The technology is superior to the legacy technology. There is no denying that. But it doesn’t fundamentally change the way payments are done. It is simply an evolutionary approach to payments, rather than a revolution.

It is obvious why the incumbent banks and financial organizations want to use evolved payment technology. It helps them continue to protect their dominant market position. But the future is not rooted in evolutionary advancement. The revolution is what will propel us forward.

Payments are entering a weird period of transition. The centralized entities and third party clearing houses want to continue the status quo as much as possible. Their businesses depend on it. The challengers are poised to leverage decentralized systems that treat everyone the same and require no one’s permission to use. While it is easier to see a centralized future, mainly because it is most like the past, the future will be decentralized in my opinion.

With that said, Visa’s move here is forward thinking compared to their incumbent peers. Most companies are still denying the value and potential of these new technologies. Visa is attempting to carve out a position of importance for themselves and sitting at the intersection of all stablecoins and CBDCs is a pretty great place to stake your claim.

Keep your eye on this as we move forward. The incumbents will continue to embrace the evolutionary technology. Regulators will be much more comfortable with it in the short to medium term. But the long game here is a decentralized digital currency that is controlled by no one, accepting of everyone, and can’t be manipulated by central banks or nation states.

MyBBCBuilder.com is a Team Build site dedicated to helping members earn Bitcoin selling Discounted Crypto. Membership is Free! We welcome all current and future members who are encouraged to help 3 get 3 via LeadsLeap rotator.

Click the banner below to join our MyBBCGlobal.io Team Build with MyBBCBuilder.com
Once there, click the large banner to join one of our teammate's MyBBCGlobal site.
Then, put your MyBBCGlobal link in our Downline Builder and promote.
Reach out to your sponsor and let them know you are ready to spread the good news!

MyBBCGlobal.io Board Chair and Top Leader, Pastor Felix Anthony, explains how he puts Jesus first in our team build.

Upon building out MyBBCBuilder.com, a Team Build program for MyBBCGlobal.io, I decided I would like to link to one of Pastor Felix Anthony's recorded Zoom presentations as I am not exactly comfortable on camera making presentations.

I did do a "quickie" video on the front page of MyBBCBuilder, but wanted to offer Pastor Felix's presentation.

With that said, I created a banner on the front page and in the member's area

I am not great at graphic design ( do have a pro for the promotional banners), but here is what I came up with:

Our team goal is to build 3 x 3 using a LeadsLeap rotator.  Once you have 3, we kindly ask you to do the same to foster growth.

1.) Click on the large banner on the front page of MyBBCBuilder.com to join MyBBCGlobal.io from one of our team members.

2.) Join MyBBCBuilder.com for free and enter your MyBBCGlobal link in our downline builder.

We have promotional tools to help you promote, and I am in the process of including tools @

BlockchainListBuilder.com to support the Team Build.

Looking forward to your success!

Today, I was on the Zoom with Pastor Felix in anticipation of the official launch of MyBBCGlobal.  Hoping the new site will launch soon.
In the background, I am trying to finalize things at MyBBCBuilder.com so I can launch it to help members build their MyBBCGlobal teams so we can all take advantage of discounted crypto and earn Bitcoin on sales.
Here is a great music video from one of our members:
Enjoy,
Nate
at July 05, 2022 No comments:
Email ThisBlogThis!Share to TwitterShare to FacebookShare to Pinterest
Labels: Buy Discounted Crypto, MyBBCBuilder.com, MyBBCGlobal

As of 7/2/2022, MyBBCBuilder.com is not quite ready to launch.  This video will serve as a placeholder until the site is ready.  At that time, I will make another video.
Nate
at July 02, 2022 No comments:
Email ThisBlogThis!Share to TwitterShare to FacebookShare to Pinterest
Labels: BBC, Discount Cryptocurrencies, MyBBCBuilder.com, MyBBCGlobal.io, ZTA
Newer Posts Older Posts Home
Subscribe to: Posts (Atom)